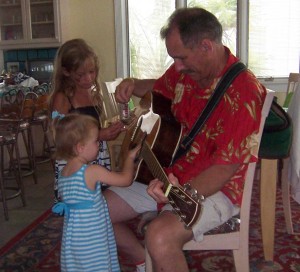 I’m a lucky man.  I was raised in a big family, with older sisters and an older brother.  Because of them, I was able to watch the birth of rock and roll – Bill Haley, Buddy Holley and, of course, Elvis.  I listened a lot to folk music and fell in love with harmonies and the sound of the guitar.  I didn’t start playing guitar until after that historic night in February of 1964, when the Beatles played on the Ed Sullivan Show.  I, like every kid I knew then, started to learn the guitar.  I switched to bass when I joined the first of several neighborhood garage bands.  Play lists included the Beatles, the Byrds, Rolling Stones, Lovin’ Spoonful, the Yardbirds and the Who.

In high school I joined the marching and concert bands, where I was a tuba player, and had lots of fun, while being exposed to some great music, learning about performance strategies, and music theory. After beating around in a few bands after high school, I met the love of my life.  My wife Shelley and I have been married 41 years, and I will go to my grave loving this woman.  She has always been my biggest supporter on anything I have tried.  After we were married and had our two sons, I “retired” from playing out, and my guitar playing was done in the living room or on the front porch, with an occasional fill in performance with a band that needed some help.  When my boys were growing up, they were my number one hobby, and I enjoyed those years immensely.  After our youngest went to OSU, I started playing in a band with my lifelong best friend, Rick Hartley.  We have been playing rock and roll together for, well, a very long time. On March 10th, 2004, we lost our younger son Garrett in a bicycle / car accident while on a solo training ride for the Olympic Trials as a cyclist.   Now, I am playing alone, just me and my acoustic guitar.  Doing this, I will be raising funds for my son’s memorial fund.  The Garrett Wonders Memorial Fund gives two one thousand dollar  Scholarships to The Ohio State University for cyclists, and a two thousand dollar scholarship to a graduating senior form the Warren G. Harding Band.  We have given out over thirty Three thousand dollars in scholarships.   I hope you will come and see me soon – it should be fun!

Thanks for stopping by – Jay